The Symposium will be held at the Margaret Thatcher Centre, Somerville College, Oxford University, Oxford, UK

Somerville College was named in honour of Mary Somerville, the self-taught Scottish mathematician and scientist who was also largely involved in the women's suffrage movement and the education of women.

Heathrow Airport is served by the Airline coach service (blue and yellow buses) to and from Oxford.

Buses to Oxford run approximately every 30 minutes between 4.00 am and 10.00 pm, less frequently during the night. A one-way fare costs £23, a period return (round trip), valid for three months, costs £29. The ride should take about an hour, perhaps a little longer in heavy traffic.

Gatwick Airport is also served by the Airline coach service and leaves once an hour during the day. The coaches to Oxford leave at quarter past the hour from the upper forecourt of the South Terminal Bus Station and at twenty minutes past the hour from Bay 4/5 of the North Terminal Bus Station. A one-way fare costs £28, a period return (valid for three months) costs £37. The ride will take 2 to 2½ hours, depending on traffic.

The Airline bus drivers accept cash (£, €, US $) on the bus, or you may pay by credit or debit card at the bus station.

The Airline driver will ask for your destination in Oxford. The bus stops at St Clements, the High Street (outside Exam Schools), St Aldates and ends at  Gloucester Green (pronounced “Gloster”), the Oxford bus station in the city centre. You may ask the driver which stop is the closest to your accommodation.

Stansted Airport It is a longer journey to Oxford.

Prices and journey times vary and you should check travel times before you book your flight to ensure that connecting travel to Oxford is available at the time you land in the UK.

If you are making your way to Oxford from Central London, trains leave from Paddington Station depending on the time of travel and can be cheaper if booked well in advance online.

The Oxford Tube departs from Victoria coach station, and other central London stops every 15 minutes or so.

Once you are in Oxford: If you do not want to walk from Gloucester Green Bus Station you will find taxis in the square behind the bus station. The average fare will be about £5 to £10 for Oxford colleges in the city centre or just over £10 if your college is further away from the city centre.  The Oxford the city bus service is excellent. Use the Oxford Bus Company App to track your bus, plan your journey, find bus stops near you and purchase tickets.

The English Tourist Board https://www.visitengland.com/

Welcome to the City of Oxford www.oxfordcity.co.uk

We are now accepting Abstract Submissions for the March 2022 session. Reviews are conducted on a rolling basis and notifications are sent within ten days of submission. 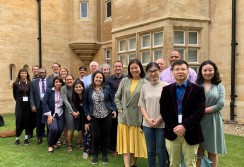 Some participants from the summer 2019 symposium

Some participants from the summer 2018 symposium 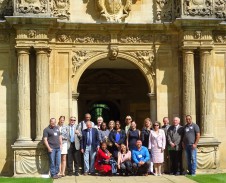 Some participants from the summer 2017 symposium at St Johns College, Oxford University 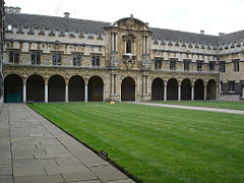